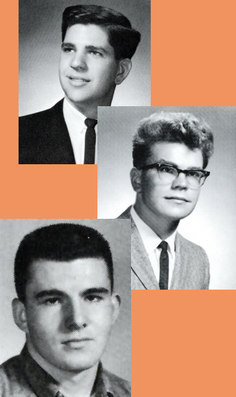 Class of 1966 Military Award
In honor of their 50th reunion, the Class of 1966 worked together and partnered with the Marlington Alumni Association (MAA) to establish the first scholarship created by a graduating class. The award goes to a student entering any branch of the military and was awarded for the first time in 2016.

Classmates Tom and Mary (Albright) Swartz, Patrick Ryan, Dale and Jan (Kesterke) Lucas, Alan Oyster, and John (Jett) Thomas said that because the Vietnam War was “surrounded by controversy and dissension, those who served“ often came home without fanfare or thanks.”

Their classmates, Ed Dimmerling, Bill Prather, and Denny Wahl were among the thousands who sacrificed everything to protect our way of life, and to the Class of 1966, their absence will never be forgotten. This scholarship has been established in memory of these fallen classmates and to honor all men and women who served in the military.

​Those Marlington friends and families who also have served in any branch or capacity of the United States military are invited to join members of the Class of 1966 in continuing to support this scholarship.