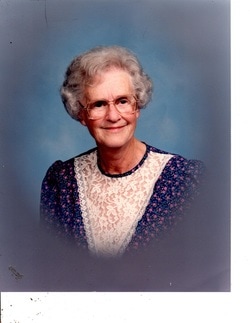 Established by Ralph (’61) and Jennifer Bingham in 2013, the Louise Bingham Scholarship benefits students pursuing a career in music or the arts.

Mrs. Bingham was Marlington’s first vocal music director, her career spanning from the mid-1950’s through the mid-1970’s. She graduated from Kent State University in 1935 and began her teaching career at Edinburg High School in Portage County where she taught English, social studies, history, mathematics, girl’s gymnastics and her first love, music.

After living on a small farm in Portage County for several years, she and her husband, Leslie, moved to their large farm on Marlboro Avenue where they grew potatoes and pickles and provided seasonal employment to many young people. When their son, Ralph, entered high school Louise was encouraged to return to teaching by Marlington principal, Thomas Hazen. He offered Mrs. Bingham the challenge of beginning the first music program at Marlboro High School, later to become Marlington High School. Mrs. Bingham soon developed several different choral levels and for many years the choral participation surpassed 60% of the entire school student body.

Although it took many extra hours of her time and added pressure, Mrs. Bingham received much pleasure providing direction and oversight of several large, musical productions including Finian’s Rainbow and Brigadoon. Mrs. Bingham retired in the mid ‘70’s to care for her husband and to enjoy her only grandchild, Christopher.

In addition to her unwavering commitment to Marlington, Mrs. Bingham was a valuable community volunteer. She dedicated her talents as choir director of the Marlboro Methodist Church (now Aldersgate Methodist Church) for forty-seven years. Mrs. Bingham died in May of 2001. Both Louise and Leslie Bingham strongly encouraged and supported young people to continue their education.