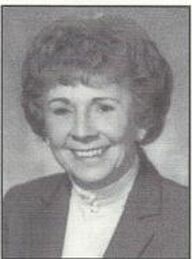 Ramser Scholarship
The Ramser Scholarship was established in honor of Ray Ramser and in fond memory of his devoted wife Eleanor (Haidet) Ramser. Eleanor was born in Alliance in 1921 and graduated from Mount Union College in 1943. She and Ray were married in 1948 and married for 55 years before her death, Nov. 19, 2003 at the age of 82.

During her 44 year tenure at Marlboro/Marlington Eleanor taught English, Math, Latin, and Spanish. She set high standards for her students and was known as a firm but fair teacher.

Mrs. Ramser had numerous praiseworthy accomplishments. Though not a graduate of Marlington, Eleanor was instrumental in recruiting the initial team of alumni and together they drafted the first bylaws and elected the first officers to establish today’s Marlington Alumni Association. She was actively involved in the first scholarships awarded in 1989 and in every facet of the MAA until her passing.

After retiring in 1987 with 44 years of teaching in the Marlington School District, she continued to serve in the public relations department.  In her honor the Marlington Board of Education established the Eleanor Ramser Citizenship Award. She was an active member of the Retired Teachers Association and the American Association of University Women, where she served as past president.

She was a former secretary of the Carnation Festival Board, co-chaired the cream socials and, dressed as a clown, visited many nursing homes. She was also a member of the Alliance Women’s Club, the B.P.O. Elks Auxiliary, the Phi Kappa Delta, the Grange, and served as grand marshal of the Marlboro Memorial Day parade.

​Though she and Ray never had children, Eleanor was greatly honored to have many parents name their daughters after her.