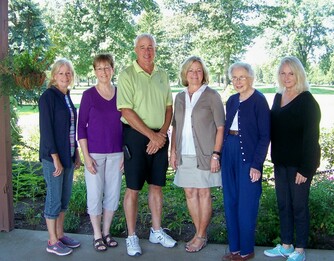 Melvin Snode Scholarship
Mr. Melvin Snode, affectionately known as "Bummie," attended two one-room schools, Union Grove and Science Hill and graduated from Alliance High School. He graduated from Mount Union College in 1940 then received a Master’s Degree in counseling from and Kent State University in 1951 after his return from WWII.

A veteran of the United States Army, he served during WWII under General Patton and was a member of the 243rd Field artillery Battalion earning the rank of Sergeant. While serving in the European Theater he participated in the liberation of the Dachau Concentration Camp.

His first teaching position was at the Fairmount Children’s Home where he also served as Marble Coach.

He is remembered by the MAA for his distinguished career at Marlington as a teacher and guidance counselor and fondly remembered by many for turning the family farm on McCallum into Tannenhauf Golf Club. If you were ever looking for Bummie, he could be found on the red tractor mowing or hunting for stray golf balls in the trees or lake.

Melvin was a member of Science Hill Historical Society. He enjoyed bowling, golfing and playing cards and was Marlington High School’s first community member to be inducted into the Hall of Athletic Excellence for his outstanding support of Marlington Athletics during his lifetime. He died October 9, 2013 at the age of 94.