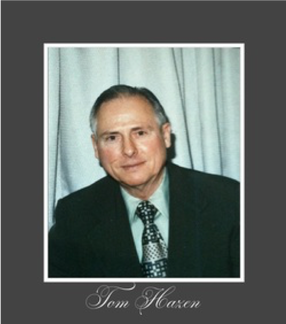 With a desire to honor his years of selfless service and dedication to his community, Petrich said Hazen was both her high school teacher and Sunday School teacher and left a lasting impression. Quick to praise, slow to criticize and committed to unwavering principles of integrity, honesty, and fairness, this annual scholarship award will go to a strong "B" student who exemplifies Hazen’s character.

One of Marlington Local School's most appreciated, respected, and admired administrators, Hazen was a lifelong resident of Lexington Township. He attended the township’s two-room Bolton School, graduated from Alliance High School and Mount Union College and received a Masters of Education from Kent State University. Hazen was drafted in 1942 to a medical detachment, part of the 2nd Battalion - 141st Regiment - 36th Infantry Division of the United States Army. He spent months in the thick of combat, having landed at Salerno in 1943 for the World War II European campaign. He received a Bronze Star and earned the rank of First Lieutenant before returning home to marry his waiting bride, Helen, in 1945.

Hazen taught social science, psychology, commercial law and geography at Marlboro High School. In 1957 he was asked to serve as the first principal of the newly consolidated Marlington School District, a blending of Marlboro, Lexington and Washington Township schools, then transitioned as principal as they moved to the new building. Later serving as the vocational guidance counselor, Hazen retired in 1984 having dedicated his career to helping Marlington students. His autobiography, Medicos Up Front, details his childhood, the Great Depression, his teen years on the farm, life at Mount Union College, early employment, military service, combat in the Italian campaign, the invasion of southern France, and his posting to the 443 AAA Battalion. He took interest in other’s lives, keeping informed of alumni accomplishments, and has often been described as a true, honorable and wise gentleman. He died in May of 2012 at the age of 95.