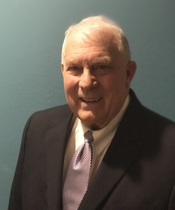 Born to Jesse and Ruth Patton, the twin brothers were enthusiastic Marlboro athletes, stars in high school football, basketball, baseball and track. Bill was the senior class treasurer, Bob was Vice President. Bill was dubbed by senior year classmates as the “busiest,” and Bob the “jokingest.”

According to the 1954 Scenario, Bill’s senior year ambition was to be an accountant, though classmates forecast his probable career to be that of “a clown.” Bob’s goal was to become an industrial chemist. Classmates instead predicted his eventual role would be that of “an undertaker!”

After high school, both attended and graduated from Kent State University- and have enjoyed successful business careers. While he never became an industrial chemist, Bob is a CPA and longtime resident of California. He most recently served as consultant and acting Chief Financial Officer for three Southern California companies. Patton previously served as a founder and principal of StarTronix, a NASDAQ traded holding company with four wholly owned subsidiaries, later serving as VP and CFO of the parent company, responsible for the consolidate corporate accounting, administration and reporting functions. Despite his classmates’ forecasts, Bob never became an undertaker but instead became the accountant predicted for his twin brother.

William E. Patton
Bill never became the accountant (nor the clown) classmates expected. Instead he worked in various Executive Management roles with Ansell Perry, a manufacturer of high-performance healthcare devices and protection equipment including a full range of surgical and examination gloves and is the holder of two U.S. patents covering a medical device package. For five years after the Massillon company was sold, Patton served as Vice President of Regulatory Affairs for Omni International in Hat Yai, Thailand. In 2001 he was named the Marlington Alumni Association Outstanding Alumni.

Bob and Bill both continue to stay in touch with former classmates and rarely miss the biennial Marlboro reunions. The genuinely warm and thoughtful twins are welcome guests at every gathering. “We’re happy to give back,” shared the brothers. “The Marlington Alumni Association is doing great work.”

This scholarship will be awarded for the first time in April, 2018, to a promising, deserving Marlington senior. Bill repeated an Abraham Lincoln quote, saying: “God must love the common man, he made so many of them.”

The Robert E. and William E. Patton Scholarship is one of more than thirty scholarships specifically established by generous alumni families and friends- individuals who have entrusted a portion of their heritage to the MAA. Consider establishing your legacy with the MAA.