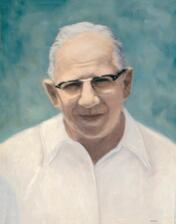 Ford C. Davis Scholarship
Ford Davis was a bright, ingenious and creative man whose varied interests and accomplishments benefitted the Marlington community. He earned a degree in Chemical Engineering from The Ohio State University, taught math in Canton Township and later Math, Physics, and Chemistry at Marlboro High School. He designed and built a number of machines, one for the manufacturing of plastic bags. He opened Buckeye Packaging in 1950, still a thriving and successful company in Marlboro Township.

​He and his wife Dorothy raised their family in Marlboro Township. Their children Nadine (Donachy) Davis (’49), Ronald Davis (’51) and David (’55), all are graduates of Marlboro High School.  Scholarships will be awarded to qualified applicants who pursue a course of study leading toward a Bachelor’s degree in any field of study.